Day on the Volcano

From the time I was a child I dreamed of being a volcanologist. The very thought of climbing around on volcanoes and sampling molten rock sounded very exciting. I grew up in Flagstaff, Arizona where there is an enormous amount of volcanic history.

As I became an adult I never lost this fascination with volcanoes.  I have been able to visit volcanoes in North America, Hawaii,  Costa Rica, and Peru.  But today was going to be really special, a day to remember.

We were going to visit one of the most active and dangerous volcanoes in the world.  I had no idea how interesting it would be.  Sakurajima (which means Cherry Blossom Island) has a history that belies its docile name.  The volcano is not technically an island since the 1914 eruption connected it to the mainland.  Sakurajima sits in the middle of a large bay on the southern island of Kyushu, Japan.

The day was bright and clear as our adventure began.  Our new friends were to be our tour guides.  Kennard was from Singapore and worked for the Japanese government with our daughter Rachel.  His wife Tomoe was from Japan.

The five of us met at the ferry landing in Kagoshima, City.  We would take the ferry to the volcano and drive our car around the island.  The ferry ride is only 2 miles long.  This means that the base of the volcano is only about two miles from the downtown skyscrapers. 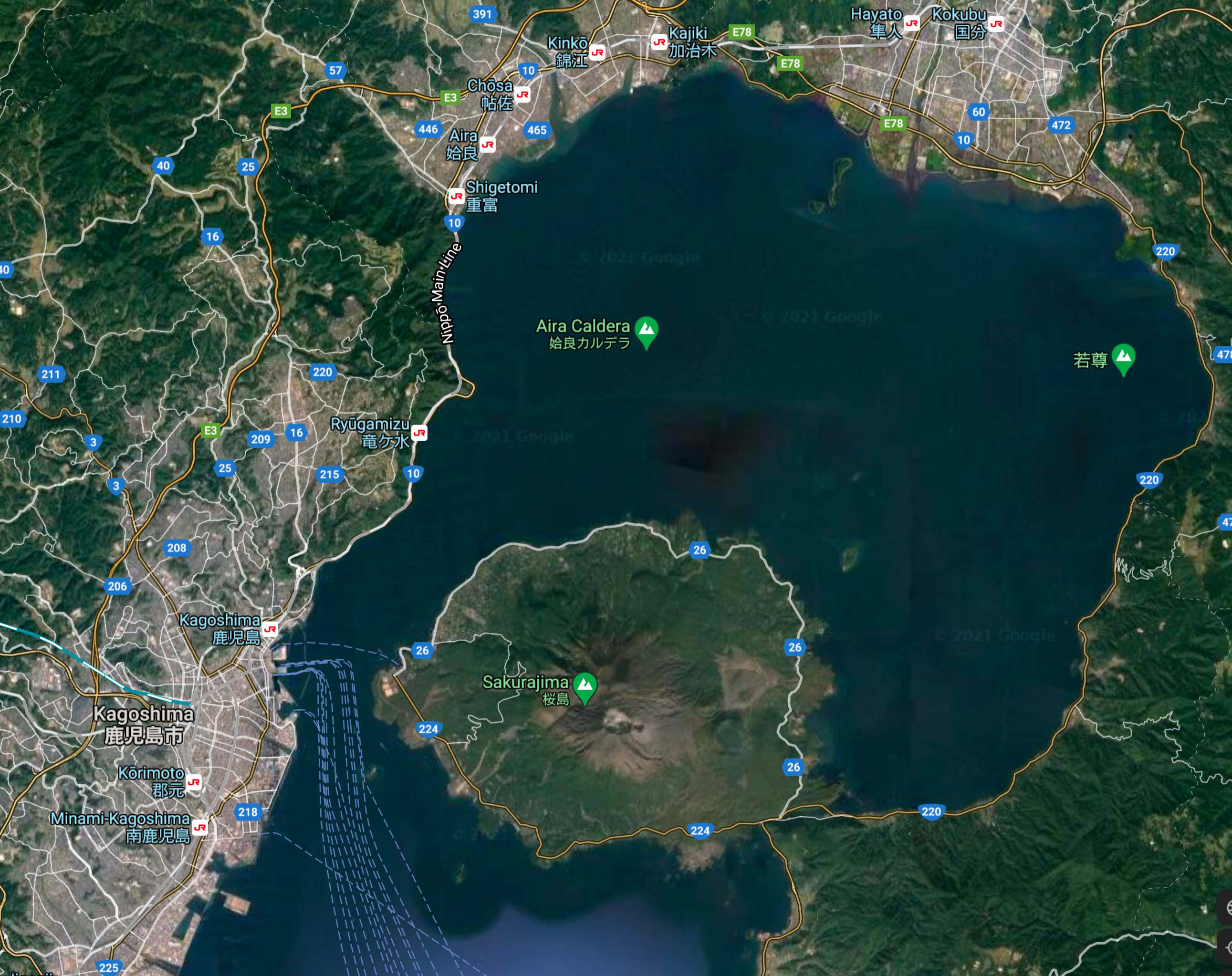 Kagoshima is a city of 600,000 people and is the largest on the island of Kyushu, which also houses Nagasaki.  The tall buildings have a great view of the volcano summit just five miles away.  Citizens are treated to a front row seat of the daily eruptions. 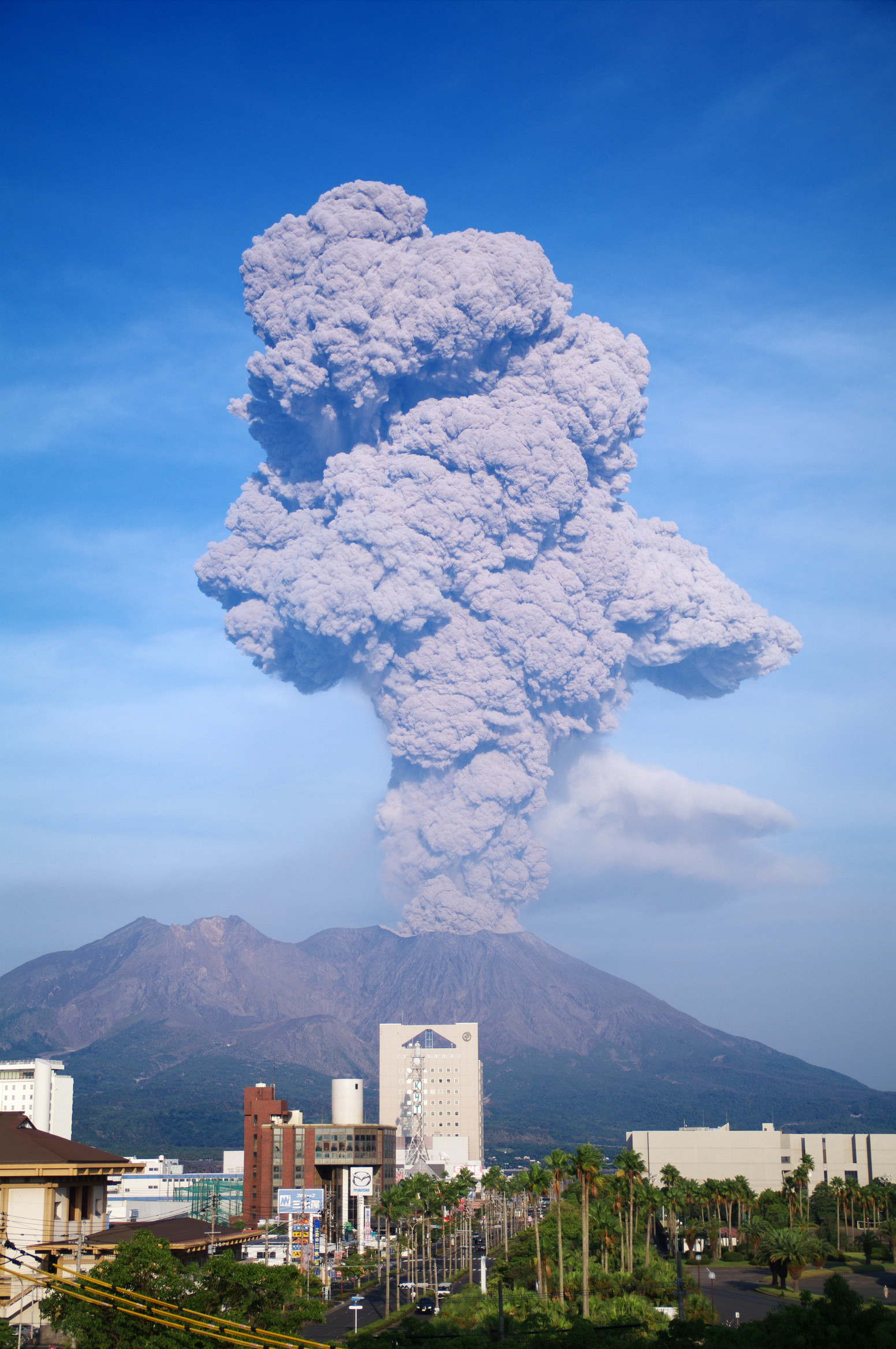 Sakurajima has been erupting consistently since 1955.  We were excited and a little nervous about wanting to drive around the volcano.  We were hoping that it would not have an eruption while we were up close and personal.

As we boarded the ferry, Tomoe told us that the Soba bowl (wheat noodles) was to die for.  She didn't use those words but we knew what she meant.  The ferry ride only lasts for 15 minutes and were hard pressed to devour the piping hot Soba within the 10 minutes that we had.  But we proved to be up to the task and it was a true delight.  Best Soba I had.

We drove off the ferry and went straight to the volcano visitors center.  There we saw displays of the volcanic and seismic activity.  We were surprised to see the growing trend line of eruptions.  Over the past three months the number of eruptions had grown to an average of three each day.

We drove the car around the island. There is a small town where people live.  The kids wear yellow hard hats to ward off the falling rocks.  There are also concrete bunkers that are open on one side to allow people to hide in the case of a pyroclastic flow.  Seams kind of iffy to me. 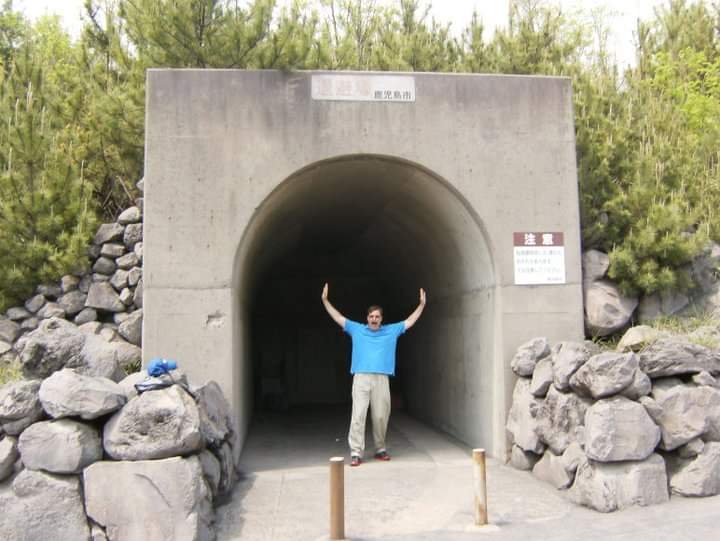 There are remnants of a small town that was buried in 1914 by lava flows from the angry mountain.  A road led to an observation point with an overlook onto the caldera. By the time we got there we could not see much for the smoke and ash.  Not a place to linger.

Elsewhere we saw extensive earthen works meant to shore up the steep mountainside.  This is intended to prevent erosion that could weaken the mountain and trigger a deadly landslide, resulting in a pyroclastic flow.  This is the most dangerous aspect of volcanoes.

Being less than five miles away Sakurajima poses an imminent threat to the citizens of Kagoshima City.

Rachel described how each day the people sweep the ash from their porch and place it in small bags, to be collected weekly.  The ask is very fine and used in cosmetics.

The typical eruption looks like a giant fist rising from the mountain.  The ash cloud usually rises one to two miles, but occasionally makes it three miles high.

On the roof of the shopping mall there is a ferris wheel.  This a great vantage point to get a front row seat of the ash cloud as it towers above the Cherry Blossom Island.  What a perfect day!

Explosive eruption of Sakurajima on November 12, 2019