Under the Mushroom Cloud

The flash was unbelievably bright. It is hard to imagine that anything could be so intensely brilliant. The hands over their eyes did little to block the light.

Dave crouched in a foxhole with his buddy that was only three deep. He wore standard battle gear, helmet, and standard light jacket. He could not help but wonder if it was enough to save him.

They were told to remain as low in the foxhole as possible until the first shock-wave had passed over them. This took a number of seconds after the initial detonation. Waiting … waiting … waiting .. sheer terror. Superheated air driving an atomic hurricane of death.

Dave’s neck got a bad sunburn in the gap between his helmet and jacket. After the initial blast had passed over them the soldiers were able to stand up in the foxholes and watch the show. As the blast radius continued outward it set fire to phosphorous pots that were used to mark the progress of the advancing shock-wave. The wave of destruction expanded outward for perhaps ten miles, well past their point at four miles from the blast.

The bomb had been set to go off 3,400 feet above the ground to minimize the amount of fallout that would be created. A humongous ball of fire was roiling well off the ground. The high temperatures of the super heated air were converting the fireball into a giant floating donut of fire. The heat naturally produces the characteristic mushroom cloud shape that is the ultimate symbol of death and destruction. 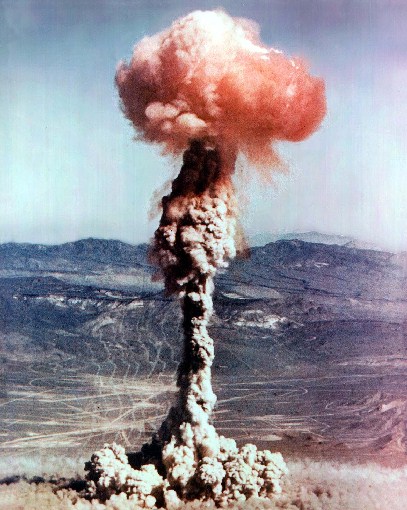 As astonishing as this was to watch, the soldiers needed to remain extremely focused. Dave was keeping a silent count as he watched the cloud. One - Two - Thirty-one - Thirty-two - Thirty-three. The superheated air from the blast forced out and produced a vacuum. This would not last long. Nature abhors a vacuum and soon the air would be rushing back in to fill it.

The soldiers had been briefed on exactly how many seconds they had to enjoy the show. Dave was diligently focused and got down again at the correct time. Others were not so fortunate. They became distracted by the intensity of the emotions they felt.

The air returning caused a second blast wave filled with lots of debris that had become loosened from the initial blast wave. The returning air was still fairly hot and knocked the distracted soldiers out of their foxholes. 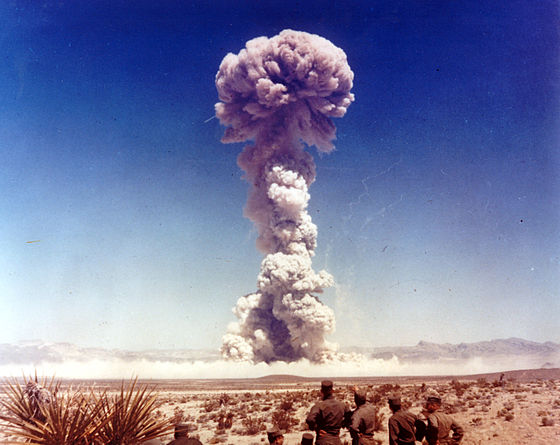 Now for the hard part. They were ordered out of the foxholes for a march across the atomic wasteland. The dust was as fine as powdered-sugar and with each step their boot sank into the dust. They marched the four miles to ground-zero of the blast. Step after step in the deadly dust.

Along the march they passed various structures and vehicles and dead and dying animals that had been stationed at different distances from the blast. Dave could never forget these things.

Once at ground-zero the soldiers were covered with radioactive dust. They were swept off with kitchen brooms trying not to breathe too deeply. Their dress was standard fatigues without even a heavy coat. They had no protective clothing and no breathing equipment or radiation equipment. The soldier did not wear dosimeters to record how much radiation they had received but when they got to ground-zero the technicians had Geiger Counters that were signing away.

The soldiers were ordered to perform physical and mental exercises. They competed to break-down and reassemble firearms and other activities that tested their ability to capture territory from some future enemy. The purpose of the overall exercise was to understand how tactical nuclear weapons might be used on the battlefield. Operation Desert Rock involved 6,500 troops as part of seven different phases.

In some detonations a number of structures had been constructed to simulate a small town. You may have seen the video footage of the small town constructed near Frenchman Flats. These included apartment buildings, multi-level stores, houses, highway overpasses, and bomb shelters. Most of these structures were devastated within a few seconds. The officials wanted to know just what would survive when the inevitable happened. Most could not survive the initial nuclear wind.

Corporal Paul David Seaman participated in the Operation Tumbler–Snapper. He was one of 535 troops chosen as observers (with another 1,675 troops doing maneuvers) as part of Operation Desert Rock IV. Dave was one of the 150 men ordered to participate from Company B, 167th Infantry Regiment, 31st Division, US Army. The detonation was named Charlie and occurred on April 22, 1952 and yielded the equivalent power to 31 Kilotons of TNT.

Dave wondered what would become of him as a consequence of this exercise. Soldiers did not wear dosimeters to record the radiation that they received during the test, so it is impossible to know the exact amount. What would the real consequences of their exposure ultimately be? No one knew but it was likely to be very bad indeed.

There are sometimes that having a vivid imagination can be terribly cruel. Would his hair fall out, lose skin, grow sick, or would there only be long term consequences like leukemia or thyroid cancer? Would he ever be able have children and if so would they be deformed?

Dave turned out to be one of the lucky ones, although there were some serious consequences from the radiation. For the next five years he was unable to conceive any children while trying very hard, but eventually my father went one to have three normal children.

He has also had ongoing problems with thyroid tumors that require regular monitoring. But considering how many of his peers fared his health history is remarkable. He survives to this day and recently celebrated his 87th birthday.

He is one of the few people alive to have had such a close encounter with an angry atomic bomb. But that day in the Nevada desert will certainly never be forgotten.

Learn more about this exciting time in our history