We can all agree that history is not linear or predictable.  History has periods of relative calm and times of intense change and turmoil.  These inflection points are only visible much later than the events occur.  It requires an entire generation or two to gain any sense of perspective on the importance of key events.

At an inflection point a decision by a leader can have an impact that is profound enough to affect the lives of millions of people.  A key turning point in history occurred in 1963 under the leadership of John F. Kennedy.  Although he did not even complete a full term as president he was involved with the three major crises of the time.

The first crisis started at the end of World War II.  Though the USSR and US were allies during the war, they were natural enemies.  The Soviets were set on world domination and the USA was the only nation that could prevent them.  After subjugating Eastern Europe the Soviets laid siege to Berlin which was supposed to be shared between all of the allies.  This culminated in the Berlin wall being built in 1961, which was meant to starve the remaining Berliners into submission.

Spy planes revealed that the Soviets were staging nuclear missiles in Cuba which would be capable of hitting numerous American cities.  This was an unacceptable risk for the USA and was matched by the US positioning missiles in Turkey that could target the Russian cities.  By October 16, 1962 both sides were basing for an all-out nuclear exchange.  For two weeks both military superpowers stared at each other ready to destroy the world.

In the United States racial tensions were at the boiling point.  Widespread prejudice, hatred, and oppression were being met with resistance.  Under the leadership of Martin Luther King, there were widespread protests.  Peaceful demonstrators were met with police-sponsored violence and the state leadership was in full cooperation with the policies of continued oppression.  It seemed likely that the nation would be headed for another civil war, unless something could be changed.

JFK would be the one to prevent all three of these disasters from destroying the country.  He blocked the Soviet claims for expansion in Europe and Asia.  He prevented the nuclear destruction of the US and Russia. And he stood up against the state governments that were supporting the racial policies leading to a new kind of slavery.

Of course, JFK did not work alone. But he was the one at the helm and decisions that he made certainly altered the outcome of history.  Kennedy had to act in many cases in ways that were very unpopular at the time.  So it is clear that another leader would have made other choices with different outcomes.  Looking at history as it unfolder it is clear to me that JFK stood at a turning point in history.

The timeline of the key events tells the story.  We can only imagine what it must have been like that summer of 63.  The world was threatening to boil over into chaos.

My Parents in Europe

My dad has a weird knack for being part of history.  I don't know anyone else that has had a better front-row seat to history.  This period of time is no exception.  Some people have a habit of being there at just the right time and place to see history pivot.

In 1963 my dad was studying linguistics.  As part of his education he decided to go to travel around Europe for the summer. They spend a month in Germany and two months in Greece, because he was particularly interested in Greek and German language.

To say that this was a volatile time in Europe was an understatement.  Two years earlier the Berlin wall was  built.  Seven months earlier the Cuban Missile crisis ended.  America and the Soviets were preparing for war along the German border.

Greece was the only Balkan state not already behind the Iron Curtain, so there was lots of communist activity within Greece. If the Russians could create enough internal support in Greece, then it would give them justification for an invasion. This situation put Greece in the path of dominoes for the Soviet regime.

Growing up in poverty my dad knew something about systematic oppression of those without power.  So the struggle of Blacks in America against institutional racism had to have a large impact on his daily thoughts about the sharing of wealth and power.  This sense of injustice resulted in a deep rage over the hypocrisy that still rules the US.

This is the powder keg that my parents waltzed into in the summer of 63.

My mom had given birth to her third child who was now almost a year old.  His first birthday was celebrated with my aunt and uncle who we stayed with during the summer.  The other kids were three and six.  Mary was struggling with a heart murmur that she had since childhood that was not yet diagnosed.  This made her tire very easily which created problems during the intensity of travel.  Shortly after the trip she had open-heart surgery to repair the heart valve. 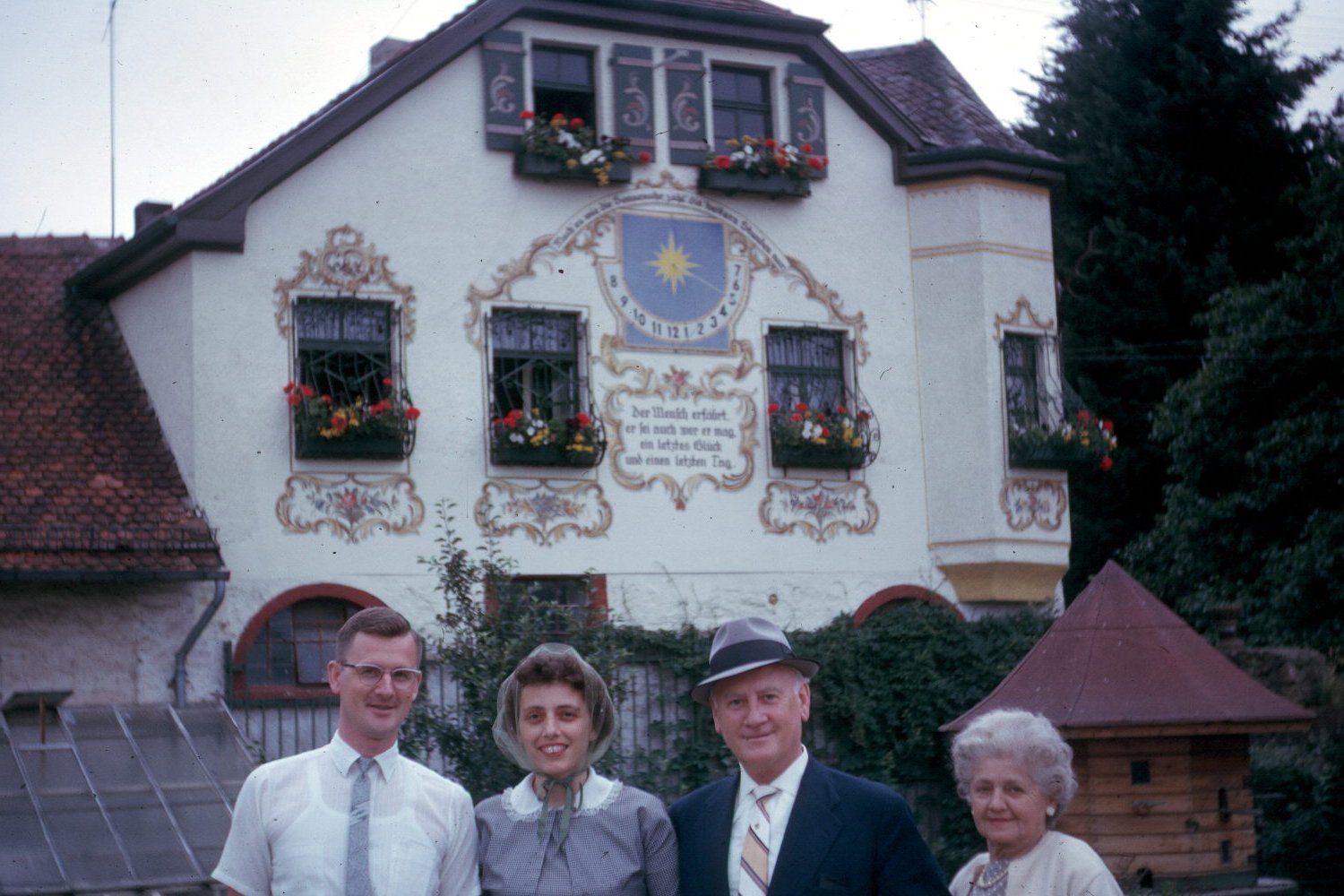 During the stay in Germany, Dave and Mary stayed with a German family in Frankfurt.  One day they heard that the President of the USA was coming to Germany.  They went downtown with hopes of seeing a glimpse of JFK.  As it turns out they were able to get very close the location where JFK got out of the motorcade and made his speech.  My dad took the following pictures showing Mary and JFK in Frankfurt. 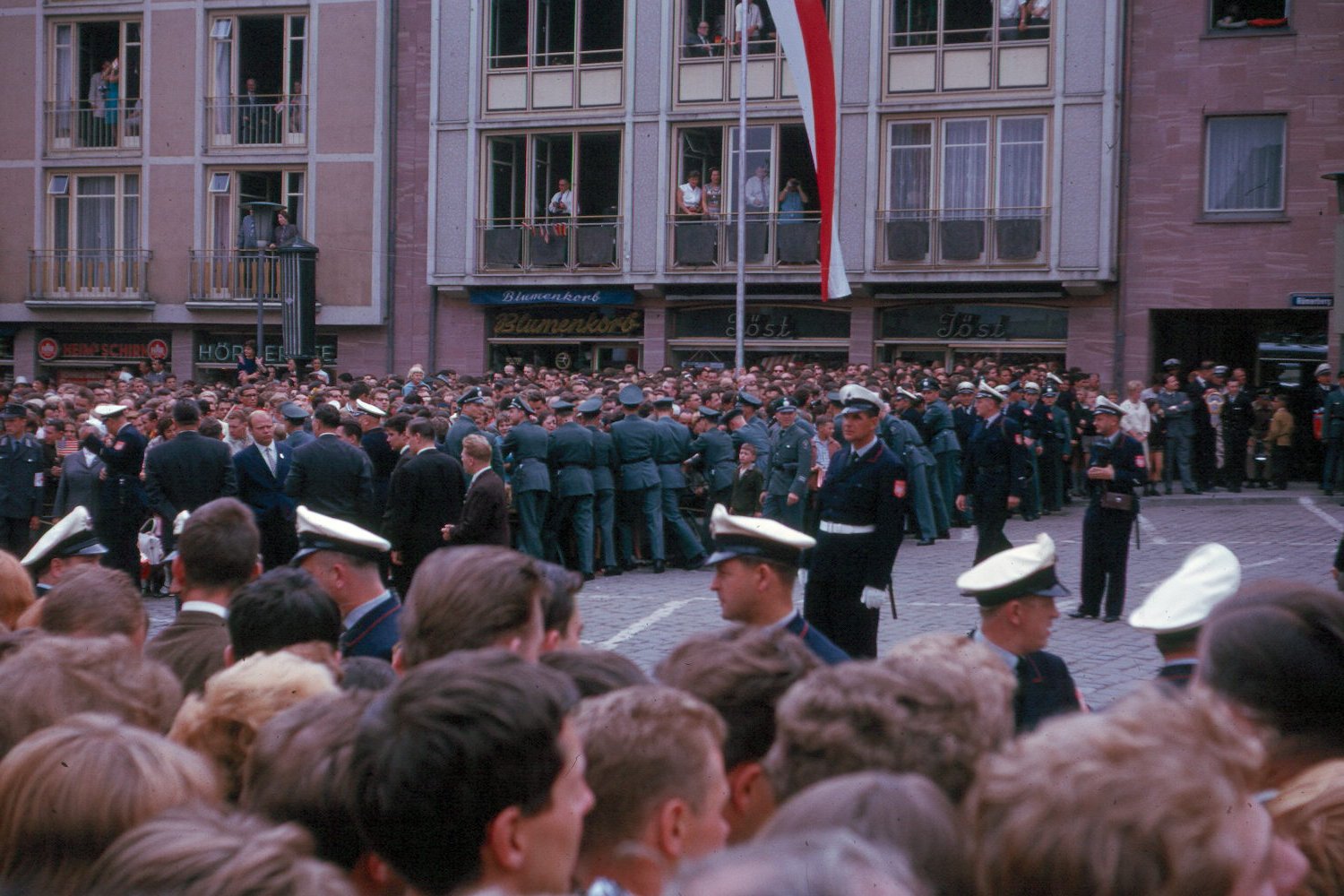 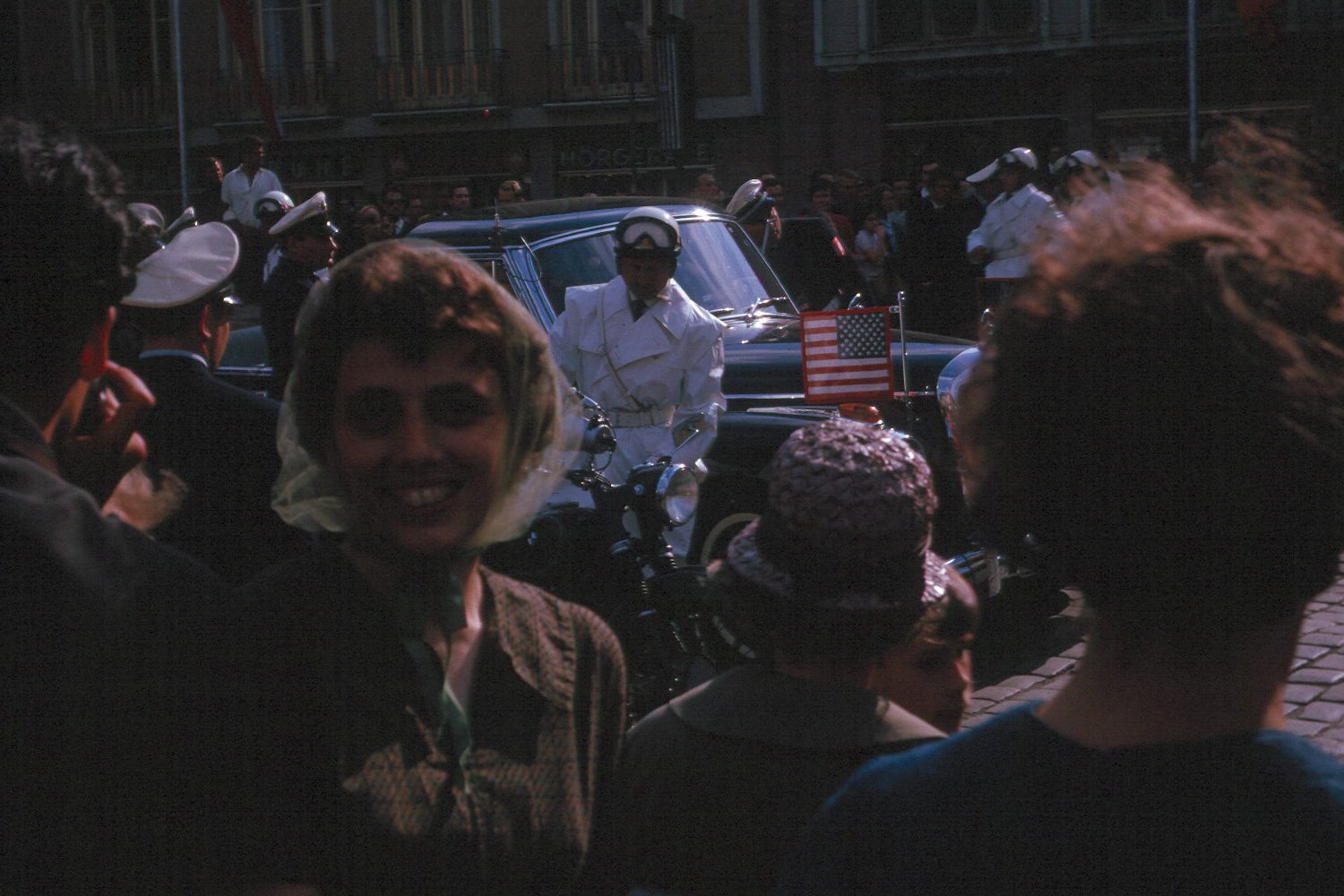 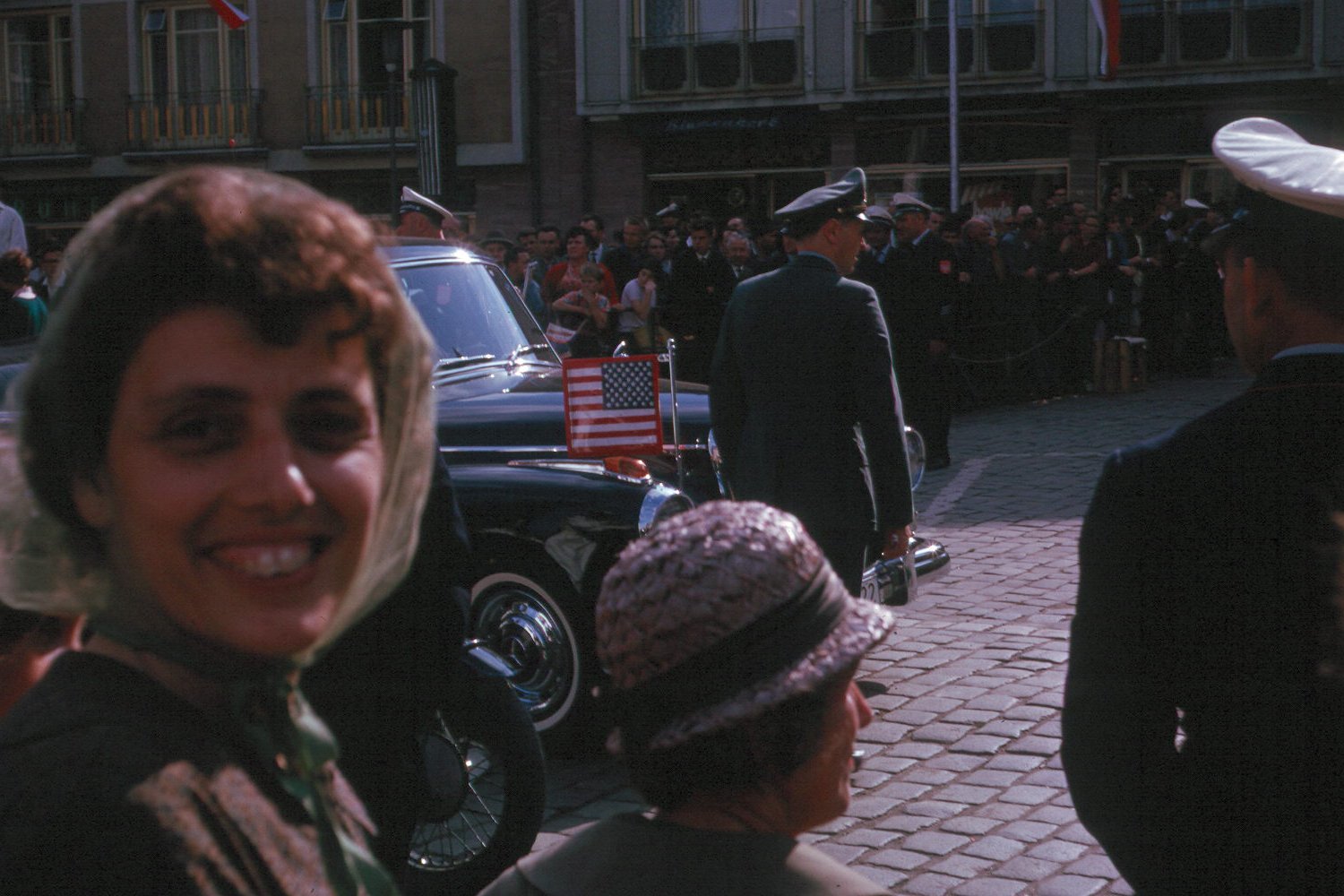 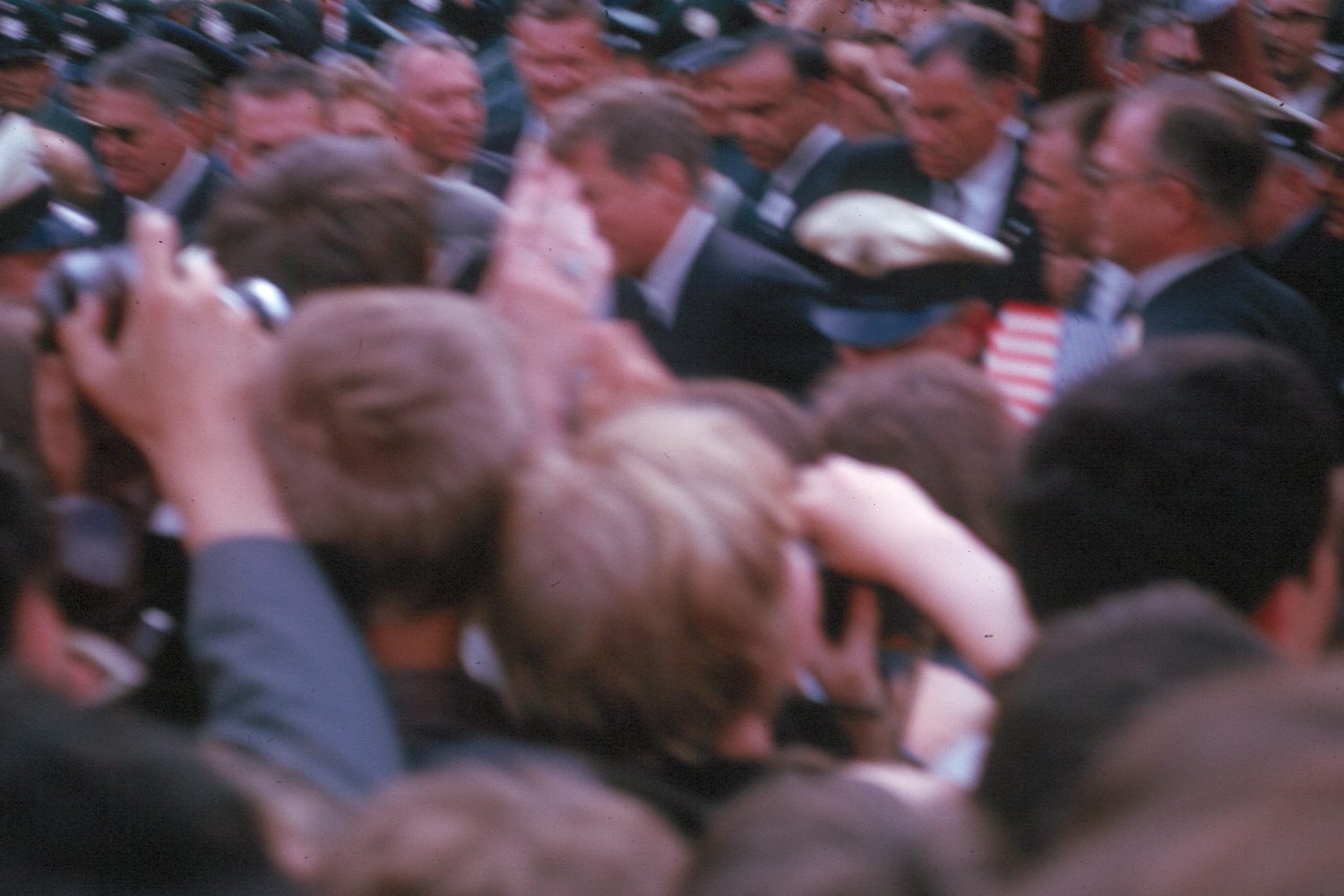 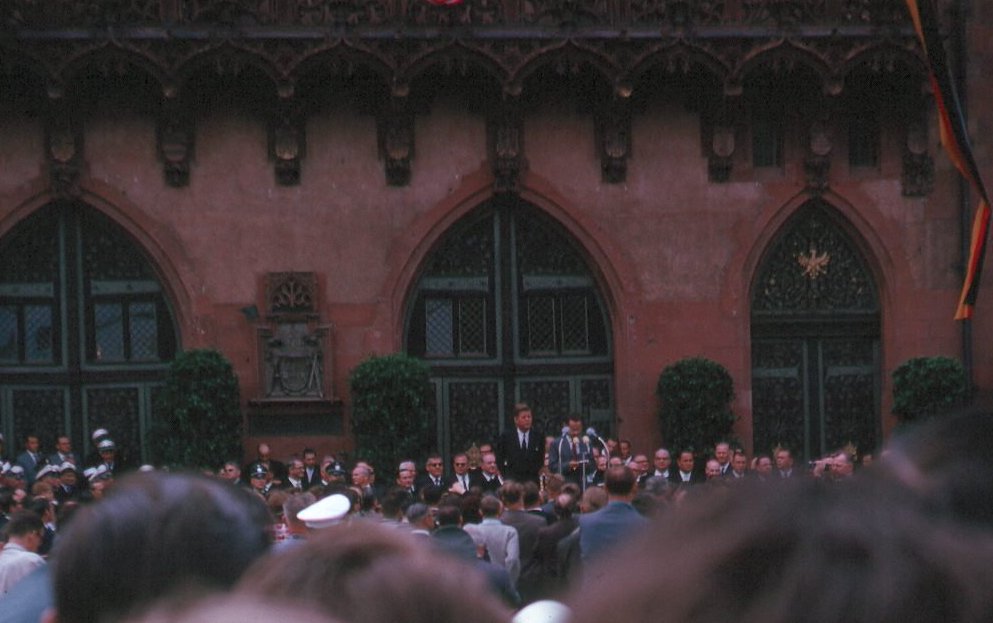 Later that evening the President continued on to Berlin where he gave the most famous speech of his career.  He announced the intention of the US to protect the citizens of East Berlin and the entire world against the tyranny of communism.  That night Dave and Mary watched the televised speech from Berlin with their German hosts. See more about the speech at Wikipedia.

The US had indeed become a beacon of hope for the German people, and the Europeans in general.  It is safe to say that, without the role of the US and the decision that JFK made during that critical year (from the summer of 62 to the summer of 63) the world would be entirely different than it is today.

Less than five months later Kennedy was assassinated.  He had  been in office less than three years. Sometimes history does turn on an individual, for good or ill.  Sometimes we get a front-row seat to history in the making but cannot fully understand its importance until much later.